Wrapper on a Monday 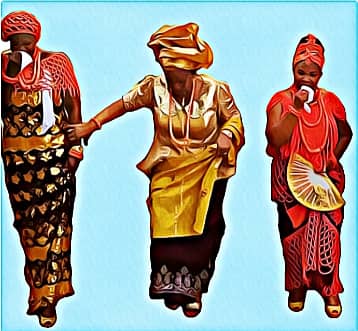 I woke up on a Monday morning with a strong desire to go to work dressed like the Rivers woman that I am (two wrappers on a blouse with head gear). This is a rear wear for young women and how we arrived at this philosophy is still baffling. In the days of my mother, it was a normal wear to work.

My colleagues at work did not make things any easier for me as I got them staring with questions filled eyes; the bold and close ones actually asked if I had an occasion to attend at the close of work, I just nodded in the negative.
At the close of work, I decided to take a long walk home and I met an elderly lady who asked if I visited the village (laughs), surprisingly even my mother wondered on my decision to get dressed in that manner. Despite the wrapper wahala, I got a whatsapps message on wrapper that has gone viral. It is a speech by Bisi Fayemi, the first Lady of Ekiti State; she is a Gender Specialist, Social Entrepreneur and Writer. She is the Founder of Abovewhispers.com.

Below is the speech:
“I was in Uganda a few years ago for one of the programs we used to run at the African Women’s Leadership Institute. One day, there was a report about something that had happened in one of the local markets. One of the women in the market went into labour unexpectedly. It seemed there was no time to get her to a nearby hospital or clinic, so the women around went into action. Some of them ran around to look for basins, hot water, towels, and razors. A few held her hand and encouraged her to push. Majority of the women around took out their wrappers and held them up, creating a protective ring around the woman, shielding her from prying eyes. Every now and then, this scenario plays itself in other markets around the continent, and the response is mostly the same – women bring out their wrappers to protect one of their own.
Sadly, this is no longer the case these days. Instead of wrappers coming out, it would be cell phones to record every graphic detail. Sure, help might still come, but not before the person concerned has all their pain and agony out there for all the world to see. Recently, there was the case of a young woman in Ajah, Lagos, who was found wandering the streets. Reports on how she got there vary, but she was stark naked, extremely emaciated and incoherent. Instead of immediately rushing to help, covering her up and getting her medical attention, onlookers laughed at her, threw things at her and recorded her on their cell phones.
Without any idea of who she was or how she got there, judgements were made on the spot about her being the victim of ritualists which she must have brought on herself in her quest to make quick money. A good Samaritan, Keira Hewatch, stepped in and took her to the hospital. Even though many onlookers were not prepared to help the poor woman on the road, they tried to stop Keira from helping her, saying she too might be bewitched. Essentially, they refused to bring out their wrappers to protect and save someone and tried to stop someone else who was willing to bring out hers. What do these wrappers signify? To me they mean protection, solidarity, sisterhood, empathy, kindness, compassion, duty, all those things and more that make us human beings. In the market places where the scene I described in Uganda happens, there is an unspoken protocol amongst the women – a responsibility to take care of one of their own who needs them. She is in pain, afraid but she has sisters around her, rooting for her and helping her.
So, I ask us my dear sisters, where is your wrapper? Where is your wrapper to shield and protect other women and girls who need you? Where was your wrapper for the little girl who was molested by someone in your household and you said ‘Shhhhh’ and looked the other way? Where was your wrapper when someone you know said she was raped by someone she trusted? Did you ask her what she was wearing? Or if she seduced him? Where was your wrapper when your friend needed succour from an abusive husband? Did you gossip behind her back that it served her right, she is too arrogant? Where was your wrapper when your sister or daughter told you that her lecturers were harassing her in the University? Did you tell them that they must have done something to encourage them? Where was your wrapper when a young woman who could have been your own sister, daughter or niece was found on the streets naked? Were you one of the women who stood by and recorded her misery and threw things at her? Were you one of the men who tried to stop brave Keira from helping? What was in it for you to have a very sick woman die untended in broad daylight, with human beings baying for her blood like animals? Even animals care more for their own.

Our wrappers might all look different, with varying sizes, shapes and colours, but each and every one of us has a wrapper. Bring that wrapper out to shield another woman, or a man. Use it to help get her a contract, help with her rent, pay her children’s fees, help her with capital for a business or simply a discreet shoulder to cry on. Never let a day go by without bringing out that wrapper. The way God works is that the more wrappers you bring out for others, the more will come out for you. We don’t only need wrappers when we celebrate and buy Aso Ebi. We need the wrappers for our trials and tribulations and we all have them.
The women in the market place might never see the woman they helped again. She might never be able to say thank you. Yet she will never forget that other women stood by her and gave her dignity and covered her nakedness. Are we prepared to cover the nakedness of others, or do we want to be part of the mob that strips them naked? These days there seems to be a war against women. Not only is sexual violence high, these crimes are now committed in full view of the public. A young woman is accused of stealing and stripped naked, hands all over her and objects being stuck into her. When this happens, what do we do, will we look the other way? When a woman is being harassed online, do we join in the abuse? The more wrappers we bring out, the safer we will all be. There is another conversation to be had with the men, with our male leaders, with those who have the powers and privileges that weaken our agency and make us forget that we have wrappers in the first place. Today, we are talking to and about ourselves.
Let us all agree to bring out our beautiful, strong, diverse wrappers; wrapper of respect, love, dignity, support and endless hope. Thank you for bringing out your wrapper Keira. God bless us all.”

When I read through her speech, I felt so good with my wrapper on a Monday. We are women, we understand ourselves better and this is an era where women supporting women brings about mental health and wellness for the womenfolk.
The truth is together, we win.
Nissi Ikenna-Amadi